I’ve been learning Chinese on and off, both officially and on my own, with varying degrees of seriousness, for 10+ years. At my current level, I can understand (listen to and read) spoken Chinese as long as it’s not overly technical. I am able to write simple blog posts (with mistakes) and have been dabbling in translation as well (working toward bigger goal).

From my viewpoint in the beginning of the year, my goal by the end of 2020 is to increase my vocabulary and comfort with the language. The primary measuring stick is my reading/writing ability. I want to increase my reading speed, reduce the number of words I don’t recognize, and be able to handwrite simple poems and diary entries without having to look up words.

This year I’ll be focusing on learning the language using music/lyrics primarily (because it’s fun, and because it plays into a larger life goal).

Also, I have been writing weekly blog posts in Chinese which kind internet strangers sometimes correct out of the goodness of their hearts, and will continue that this year. I do one 300-500+ word post per week, and a second post where I copy and translate a short story. When that is over, I will probably use a chapter in a book or article as translation practice.

This year I’d also like to finish my hand copying project that I started in 2019. There’s half a book left.

I am working on a zhuyin/pinyin chart of words, which I need to figure out a schedule for. It will probably take more than one year to complete, depending on my speed and what else I have on my plate.

How I’ll know if I’ve reached my goal:

I will be able to read all the unfinished magazines and books in my current Readmoo library at ~50-75% of my English reading rate (If I can finish an English book in 5 hours, I should be able to finish the Chinese equivalent in 10 hours or less).

Stated goal/strategies for this month: (2/7) No explicit strategies besides maintain my weekly posting habit.

Actual updates: (2/7) One major achievement was I finally finished archiving all of my articles since 2018, and replying to old comments (several months behind) as of today! Yay! The key now is to keep updated with the archive 🙂

This month, I kept up my habit of posting 2 articles per week (I usually write both in one day then schedule them ahead). 1 article is a translation (Chin–>Eng) of a short detective story. I am nearing the end, should be done halfway through March. The other is a “free write” on whatever topic is top of mind at the moment.

This has been troublesome, because some days I feel uninspired to write anything. So a few weeks back, I planned out potential topics for the next 6 months. That has taken a significant mental burden off my shoulders.

Another project that has something to do with Chinese learning is our recent Chinese song translation video project. Since it’s more music production heavy, I describe it in that post instead. However, the process of creating those videos DOES lead me to learn a bit of Chinese as well.

(2/17/20) I recently discovered a Chinese literacy character-recognition test, after searching the term “識字測量.” It started out way to easy and quickly went to way too hard. I guessed on a bunch of words. And my result, accurate or not, came to a recognition of about 3,300 words, which puts me smack dab at the 50% mark of the bell curve. Apparently: 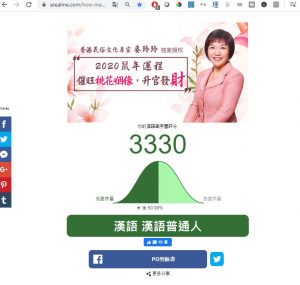 So, new idea: By the end of the year, I want to retake this test and see how much I’ve improved. I did a quick Google search, and it looks like the average educated native should know 8,000 words, you need 3,000 give or take a few hundred to read a newspaper, and you need 6,000 to be familiar with business, place names, restaurant items, etc. (Or so says Go Abroad China) So my goal is to hit 6K asap (maybe even by end of this year? Or at least close?) and then shoot for the elusive 8K after that.

I’m not fooling myself. I know that as you get higher, the difficulty level increases. At the tip of mountain, the difference between levels is slight, yet requires ever more effort.

I’m trying to figure out what is my goal, or rather, what steps are priorities on my way to reach my ultimate goal: chameleon-like fluency, where I can read, and speak and write at least as well as a smart high schooler or non-Chinese-lit-major undergrad.

I want to be able to express myself fully (or at least 99.99%) in Chinese (which is tricky, because a lot of my thoughts are convoluted, complex, and lend themselves to high level vocabulary that I don’t know in Chinese) in speaking and in typing. I want to be able to read fast enough that I can get through a book at near the same speed I do in English and don’t feel tempted to copy and paste internet stuff into Google Translate just to skim faster.

To that end, I’m playing with creating a system where I read more in Chinese, highlighting words I don’t know, and then coming back to review the unknown vocab until I understand it. After all, I just keep buying ebooks on Readmoo, I need to read them or else that money will go to waste. The only problem is I am still very limited in my reading vocab and speed. It takes 10x the time to read a Chinese book than an English one.

I think. I haven’t actually calculated. I should. I need to measure how much time it takes to finish a certain number of words, pages, chapters, books.

And I just discovered today that Readmoo started an affiliate referral program, which is even more incentive to read more books, write Chinese book reviews on my Medium blog, and hopefully generate some minor income. Not expecting much, but the important thing is the motivation.

So okay. Just keep doing what I’m doing and at the end of the year, re-test vocab!

Stated goal/strategies for this month: (2/7) Start a new Second Article plan. Go through RDE youtube course (and art course!) and apply as much as I can.